Who is responsible for blocked drains in Canberra?

Being 24-hour emergency plumbers in Canberra, we receive numerous phone calls about blocked sewer drains and blocked stormwater drains. Panicked home owners asked us, “Who is responsible for pipes that are overflowing or backed up with stormwater or sewerage”? The answer is met by the following questions, “Where is the blockage leaking or overflowing from, when does it happen”? “Are you renting and could you have caused the blockage”?

Once we have established that, the answers are very simple. For example.

It is the responsibility of ICON water 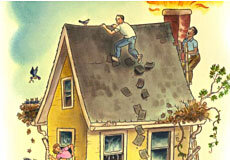 It is likely the responsibility of the property owner

It is likely the responsibility of TAMS It is the responsibility of renters

ICON and TAMS offer reimbursements for any work done that identifies a blockage that originated in their networks. However, there can be many grey areas that eventually determine the responsibility for blocked drains. In many cases, the connection between the home owners drain and ICON’s or TAMS’ drain has to be excavated, while the drain is still blocked, to prove where responsibility lies.

It takes a professional with the right equipment to identify where the blockage is and the cause. TAMS and ICON will not reimburse home owners who try to do any work to expose the connection themselves.

If you have blocked drains in Canberra and you are not sure who is responsible, 6 Star Hot Water & Plumbing can help.

If you liked this blog add a review on Google. Just click here to write a review

Robert Edwards has operated plumbing, drainage, hot water repair and gasfitting businesses in Canberra since 1991. He is certified by Rheem as a solar hot water repair technician and was trained at the DUX Solar Hot Water Institute. He is a licenced plumber, gasfitter and electrician, and has trained in hydrogen fuel cells and water electrolysis at the Hydrogenics Hydrogen Academy in Brussels. He is on numerous gas industry advisory panels and the AS/NZS standards committees. He is also an integral Member of Master Plumbers ACT.